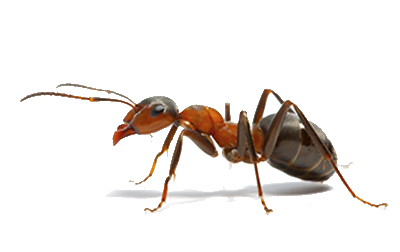 An ant’s life begins as an egg. Ant eggs are soft, oval, and tiny – about the size of a period at the end of a sentence. Not all eggs are destined to become adults – some are eaten by nestmates for extra nourishment. An egg hatches into a worm-shaped larva with no eyes or legs. Larvae are eating machines that rely on adults to provide a constant supply of food. As a result, they grow rapidly, molting between sizes. When a larva is large enough, it metamorphoses into a pupa. This is a stage of rest and reorganization. Pupae look more like adults, but their legs and antennae are folded against their bodies. They start out whitish and gradually become darker. The pupae of some species spin a cocoon for protection, while others remain uncovered, or naked.

Finally, the pupa emerges as an adult. Young adults are often lighter in color, but darken as they age. The process of development from egg to adult can take from several weeks to months, depending on the species and the environment. Did you know that ants, like all insects, are full-grown when they become adults? Their exoskeletons prevent them from getting any larger.Furthermore, adult ants belong to one of three castes: queen, worker, or male. Queens are females that were fed more as larvae. They are larger than workers and lay all the eggs in a colony – up to millions in some species! Queens initially have wings and fly to find a mate(s), but they tear them off before starting a new colony. A queen can live for decades under the right conditions. Workers are females that were fed less as larvae. They do not reproduce, but perform other jobs, such as taking care of the brood, building and cleaning the nest, and gathering food. Workers are wingless and typically survive for several months. Males have wings and fly to mate with queens. They live for only a few weeks and never help with the chores of the colony.